The History of Opera

In Western tradition, an opera is a staged work set entirely to music with orchestral overture and continuous music and spoken song (recitative), arias and chorus.

Developed in early 17th century Italy, opera has been an artform for over 400 years – a unique combination of theatrical and musical performance.

During the early Baroque period composers like Monteverdi, Handel and Vivaldi were at the forefront of the genre with famous works include L’Orfeo and Guilio Cesare. As the centuries progressed, so the trends in opera changed into the classical period when Mozart and his librettist da Ponte where at their zenith when many famous operas in today’s popular repertoire were composed including La nozze di Figaro and Cosi fan tutte.

In the Modernist period of the 20th century composers moved away from the traditional opera arias and famous composers of this era include Britten, Birtwistle, Adams and Turnage whose work include Billy Budd, The Minotaur, The Death of Klinghoffer and Anna Nicole. 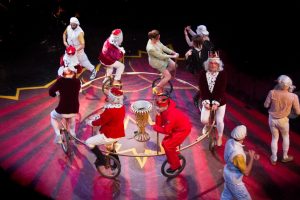 Orpheus in the Underworld – photograph by Nathan Cox

In male voice type categories, the highest modern voice type is a countertenor, with lower voice of a tenor often used for the male romantic lead. The baritone tends to be used for rogues and husbands, whilst the lowest male voice, the bass, is used for those in power.

Buxton International Festival 2019 is the perfect opportunity to dip your toes into opera for the first time and discover the operas being staged: a famous Russian romance, a Baroque discovery, a popular unpretentious romp through the underworld, and an unbridled scandal with resonances for today’s world.