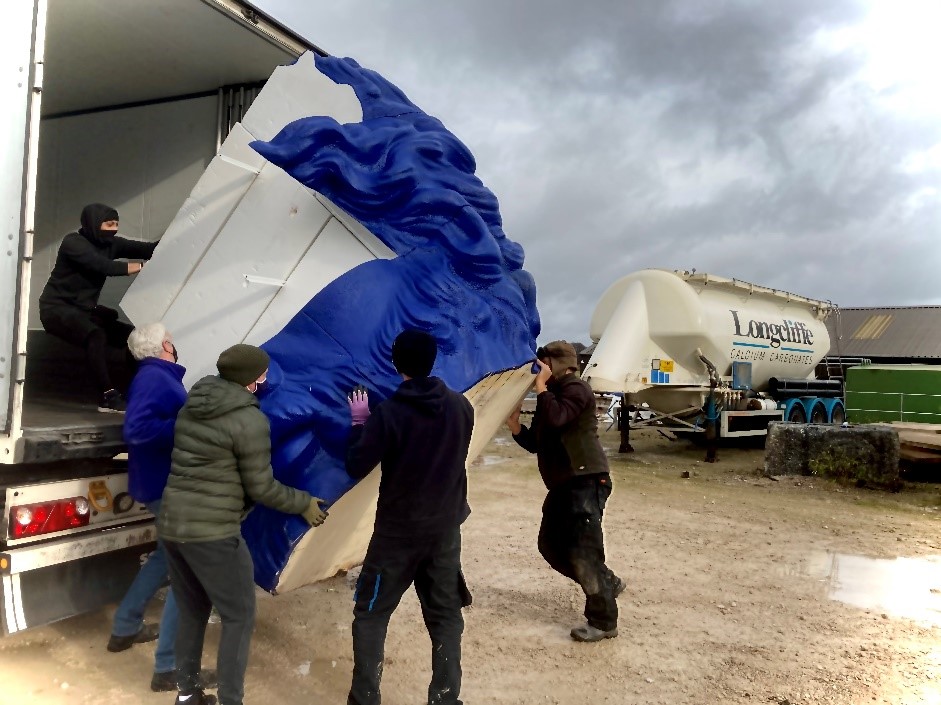 A giant blue head, elaborate costumes and a 3 foot replica of the planet Jupiter were an unusual delivery for Peak District quarry firm Longcliffe!  The shipment arrived all the way from Austria and was met at the company’s Brassington site by crew from Buxton Opera House and Buxton International Festival.  The items are part of an impressive set that will be used for the forthcoming opera Viva La Diva, which Saltzburg State Theatre has produced in association with Buxton International Festival.

The pieces are now being securely stored in three containers in their temporary home ready for use.  “Buxton Festival has no storage space of its own, so we are immensely grateful to Longcliffe for allowing us to store our equipment on their site” explained Chief Executive Officer Michael Williams.  “Longcliffe came to our rescue two years ago and donated the space, before that many useful props were ending up in landfill.  We now have a growing collection of items that we are looking forward to unpacking and re-purposing for the 2021 Buxton International Festival.”

Longcliffe Group Managing Director Viv Russell said quarry firms were not only stewards of the Peak District landscape, but also stewards of the local communities.  “As a quarrying industry we are very committed to our local community, and supporting the community fits in with our licence to operate,” said Viv – who has backstage theatre experience himself.  One of his past part time jobs was making props for the Haymarket Theatre – including creating a bed for Hollywood legend Lauren Bacall in the Tennessee Williams play ‘Sweet Bird of Youth”.  The containers have been donated to the Festival by supporters Derek Raphael and Bill and Sue Tyson.

The arrival of the set was a big day for the Buxton International Festival team as they continue to plan for the town’s opera, musical and literary Festival, running from the 8th to the 25th July 2021.