Music, opera and books continue to entertain and inform during these strange times. In this blog post, BIF Board member Mark Sutherland, writes about the lockdown inspirations that have been lifting his spirits over the past 10 weeks. 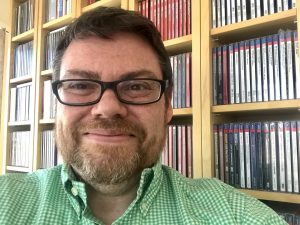 As our chairman Felicity Goodey wrote in her own blog recently, cancelling this year’s Buxton International Festival was one of the hardest decisions that the Board of Directors had to make. Even more so considering what a terrific programme of opera, music and books that Michael Williams, Adrian Kelly and Victoria Dawson put together. The Board continues to meet and we are now becoming experts in Zoom holding our meetings remotely. In addition to Board Meetings I am also chairing the Festival’s Audit and Risk Committee plus helping Michael and Felicity as required.

In the absence of our own Festival I am immersing myself in operas from other festivals. I am a big fan of Richard Wagner and own several versions of his Ring Cycle on disc and DVD. I particularly enjoyed a 1951 Bayreuth Festival recording of the final part of the cycle Götterdämmerung, which unbelievably lay in the vaults for nearly 50 years! Sticking with the 1950s Wagner theme, I have also enjoyed a 1955 performance of the Flying Dutchman. I have seen this opera number of times including a terrific performance at the Staatsoper in Berlin.

Mozart operas regularly feature at the Festival. I have been listening to two of his most famous operas, Don Giovanni and The Marriage of Figaro. These studio recordings based on performances at the Edinburgh International Festival in the 1970s feature the English Chamber Orchestra conducted by Daniel Barenboim. Both include my favourite soprano Heather Harper, who sadly died last year.

One of this year’s Festival highlights was due to be our first ever co-production with the Buxton Opera House of Stephen Sondheim’s A Little Night Music. I have been enjoying listening to the original London cast recording from 1975, two years after the Broadway premiere.

Like many of you (and judging by ticket sales!) I was looking forward to the appearance of the Kanneh-Mason Trio. Cellist Sheku recently recorded Sir Edward Elgar’s Cello Concerto with Sir Simon Rattle and the London Symphony Orchestra. I enjoyed his interpretation in a work so closely associated with Jacqueline du Pre and Beatrice Harrison, who recorded it with Elgar himself.
Violinist Jennifer Pike was due to be this year’s Artist in Residence. I was lucky to see her perform in February at an event for London-based Friends. Jennifer has Polish ancestry and a number of her concerts were due to feature Polish composers. Listening to her recording of Polish works shows what a treat we were in for! 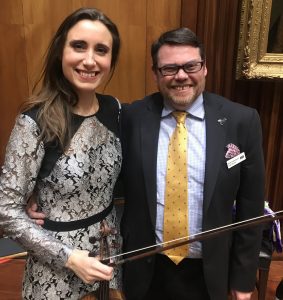 A highlight of last year’s 40th Anniversary Festival was the BBC Philharmonic performing in the Octagon. I was looking forward to their return with conductor John Wilson. I love the music of Eric Coates and enjoyed the recording of his orchestral works from Wilson and the BBC Phil.

It hasn’t all been classical music though, I am big vinyl enthusiast and been listening to The Kinks, Scott Walker, David Bowie alongside my favourite singer Jackie Trent.

The lockdown has given me plenty of time to catch up on reading. I have just finished Ed Stourton’s Auntie’s War, a history of the BBC during the Second World War. Reading this brought back memories of my Masters dissertation. I spent a lot of time in the BBC Archives researching the BBC during 1939 and 1940. Another book recently completed is Beethoven for a Later Age: The Journey of a String Quartet written by Edward Dusinberre of the Takács Quartet. This is both a history of Beethoven’s sixteen string quartets but also of performing them in the studio and concert hall.

This year I was looking forward to the return of Isabel Hardman who appeared in one of our 2019 Perspectives events, that we run in collaboration with the British Academy. I am currently reading her book Why We Get the Wrong Politicians, a wonderful analysis of the world of Westminster full of lots of off-the record interviews. I am also looking forward to reading Stephen Johnson’s new book on Mahler’s Eight Symphony, The Eighth: Mahler and the World in 1910. This analyses Mahler’s symphonic masterpiece in the context of the political, cultural and technological climate of the time.

In addition to my work for the Festival I continue my day job as a Civil Servant working in the Cabinet Office. I am just about getting used to not working at my desk in Whitehall but from my dining table from Sheffield.

I am keeping in touch with family and friends daily through social media and even the old fashioned telephone. Every week the Sutherland clan, which stretches across the UK, take part in a quiz on Zoom. I have also had virtual afternoon teas and drinks via Zoom too! The drinks were real and I am enjoying sampling my wine collection, in moderation of course!!

Being in the house I am spending a lot of time watching TV and DVDs. I am currently binge watching all three series of 1980s seafaring soap Triangle. Some people say it is the worse series ever made, but I love it! Just like the late Clive James I can do both highbrow and lowbrow!! Finally, I would just like to wish our superb Festival team, performers and supporters very best wishes. Stay safe and we will all be together again soon.