Broadway comes to a sitting room near you

Pensioners were treated to a concert of Broadway show-stoppers in their own sitting room thanks to a partnership between Buxton International Festival and a local charity. 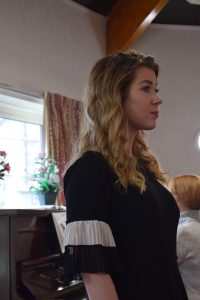 The concert was part of the Festival’s campaign to bring music out of theatres and into the community. It is being supported by the Hall Bank Trust, a Buxton charity which works to improve the lives of older people in the town. 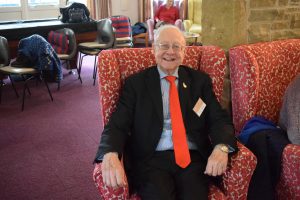 ‘I’m sure we’re going to hear a lot more about this young lady – Covent Garden watch out!’ said the Trust’s Chairman Roy Pickles after Ellie’s rendition of songs from Gounod’s Romeo and Juliet, Puccini’s La bohème and ballads including Danny Boy.

She also delighted her with audience with her perfect comic timing in Kurt Weil’s The Saga of Jenny and Vanilla Ice Cream from the show She Loves Me, on which the Tom Hanks film You’ve Got Mail was based.

‘She was outstanding,’ said Hartington Gardens resident Moira Jones. ‘It was an absolute treat.’

The partnership between the two charities has also taken the show to the Hawthorns care home and Queens Court Day Centre in Buxton.

‘This project is a perfect example of our Festival carrying out its mission to connect artists and audiences in ways that lift the spirit and offer unexpected opportunities for joy, celebration and exploration,’ said Chief Executive Michael Williams.