Singer Nikki Martin had her own fairy tale moment when she took the leading role as Cinderella on the Buxton Opera House stage just three years after working there backstage as an intern. 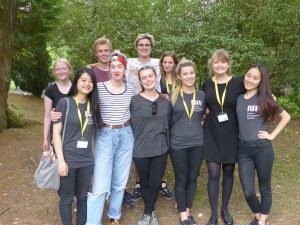 Nikki and her fellow interns in 2018.

Playing the title role in Cendrillon, a 19th Century opera based on the Cinderella story, Nikki won The Guardian critic’s heart with “her silver-voiced performance” as part of the Buxton International Festival (BIF) Young Artists programme in 2021.

The cast was made up of the next generation of opera singers, most of them fellow graduates of the Royal Northern College of Music, which has a long-standing partnership with BIF.

Nikki with the cast of Cendrillon

In 2018, Nikki was one of the hopeful interns who slog away behind the scenes, running errands, clearing up, setting up and getting the lowdown on how the opera world works.

“I didn’t think I’d be up there in the spotlight, although I really wanted to be,” said Nikki.

After graduating, 24-year-old Nikki sent her CV to BIF, hoping her time as an intern had counted for something.

“It was quite surreal,” said Nikki about getting the part. “I didn’t expect it would happen in just three years.”

And The Young Artists lived up to their promise, with The Spectator reporting that the capacity audience “just kept applauding,” while The Times said: “this young Buxton International Festival is full of vocal promise.”

Nikki said: “Buxton is unique in the fact that there are so many young performers. That’s an essential career development.”

She praised the atmosphere Artistic Director Adrian Kelly creates for young artists: “You don’t feel that you’re going to get fired if you do something wrong. You feel nurtured.

“If you needed help or advice, there were people there who would help you to work stuff out.”

Nikki’s career has taken her from Hawaii to Vietnam, with a spell touring the UK in Gilbert and Sullivan. “You are going to be paid to do something you like and see places you probably never would have seen and probably will never see again.” The next stage is to move to London and build a freelance career in music, with the ultimate aim of working in Europe.