Checkmate in Berlin: The Cold War Showdown that Shaped the Modern World

Berlin was in ruins when Soviet forces fought their way towards the Reichstag in the spring of 1945. The fate of the German capital had been sealed four months earlier at the Yalta Conference. The city, along with the rest of Germany, was to be carved up between the victorious powers – Britain, America, France and Soviet Russia. On paper, it seemed a pragmatic solution; in reality, it fired the starting gun for the Cold War. No longer united by the common purpose of defeating Germany, they reverted to their pre-war hostility and suspicion, ensuring that Berlin became an explosive battleground. Checkmate in Berlin tells this exhilarating, high-stakes tale of grit, skulduggery, and raw power. 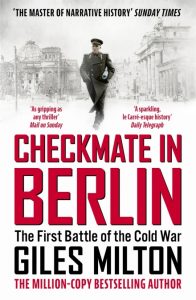 A Restless Republic: Britain Without a Crown

Writer, historian and curator Anna Keay brings to life the most experimental decade in Britain’s history. It's the story of how these tempestuous years set the British Isles on a new course, and of what happened when a conservative people tried revolution.