How we abuse the natural environment will soon be viewed with the same kind of horror now reserved for slavery or child labour, explains one of the nation’s foremost nature writers.

Mark Cocker, whose last book Our Place was a call for a revolution in the way we protect our natural world, is bringing together fellow writers at Buxton International Festival to consider how literature can change attitudes towards the environment in the same way that Charles Dickens’ novels once challenged Victorian values.

“Our event in the Festival reflects the increased awareness of the climate crisis and of species extinction,” said Mark.

Movements such as Extinction Rebellion as well as the actions of Swedish schoolgirl Greta Thunberg are encouraging a much clearer understanding of the issues that now face the world as a result of habitat destruction and global heating.

“But our intensifying anxiety about the natural world is also finding an important voice in creative writing,” says Mark.

He will talk with the author Tessa Boase, who has written Mrs Pankhurst’s Purple Feather. The book charts how women during Victorian and Edwardian times simultaneously sought female suffrage while founding parts of the environmental movement we know today. Their early protests against the use of feathers in fashion led to the creation of the Royal Society for the Protection of Birds, Europe’s largest conservation charity.

“These remarkable female pioneers were right at the vanguard of environmental protest. It is great to see the links between their works and modern books like Tessa’s, which we celebrate in literary festivals like this one more than 100 years later,” said Mark. “Those Victorian women were the first people to change our understanding of nature’s importance. We still haven’t quite got their message yet.”

But he believes the impact of nature writing will eventually mirror that of Dickens, whose novels highlighted the scandal of child exploitation and explored Victorian practices that we think of as abhorrent.

“Writers in general serve as a kind of early warning system,” said Mark, who will also be talking to the distinguished author Jean McNeil. She is a one-time writer in residence for the British Antarctic Survey and her award-winning book Ice Diaries is both an examination of the issues of global heating but also a wonderfully lyrical celebration of our planet’s last great wilderness.

Mark, who grew up in Buxton, became fascinated by nature while exploring the fields and woods behind his home on Lightwood Road.

Now that area on the edge of the Peak District is in danger of losing many of the birds he watched as a boy, such as lapwings and curlews, which were recently classified as Near-Threatened with extinction. 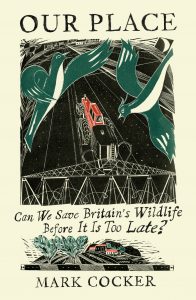