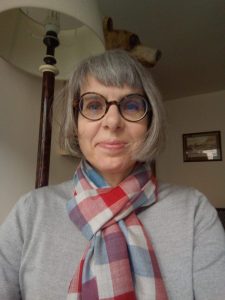 Taxidermy, Jane Austen and English pastoral music all feature in this week’s Lockdown Inspirations as Book Festival Director, Victoria Dawson, shares the music and books that she’s been enjoying during the last six weeks.

Is it is a good thing that we had printed and distributed our 2020 BIF brochure or a very terrible thing? Financially it is of course terrible, but artistically there is a record of ‘the festival that will never be’. A few copies of the brochure will sit in the corner of the BIF office that contains our archive of 41 years. I think I have already fogged the memory of the creeping realisation that the 2020 festival would be cancelled. I certainly remember that it took a fraction of the time to communicate with our authors and publishers compared to the months it took to compile this years festival line up. The warmth of support from our authors though was memorable and humbling and much appreciated on a tricky day. A week later the decision was taken to cancel the other book festival I am involved with. This has been replicated across The Arts as many freelancers work for more than one organisation. I certainly have heard from authors who crossed out summer festivals day after day and saw their new book promotion drain away.

For BIF 2019 I was terribly excited when Adrian programmed Garry Magee and Tim Lole to perform English pastoral music of the First World War period as an accompaniment to my event on the English pastoral novel with Tim Pears and Melissa Harrison. As it turned out, I was running across to the Palace Hotel from the PAC to introduce Sir David Cannadine as the next event and missed the recital in its entirety. I can make up for that now with recordings of works by George Butterworth and my personal favourite Cecil Coles who like Butterworth was killed in active service on the Western Front.

I was due to be interviewing Laura Thompson on her utterly captivating book Take Six Girls: The Lives of the Mitford Sisters as part of our new Crescent Salons series with Adrian playing music from Noel’s Coward and Gay to add that special something that is unique to BIF, top class authors alongside very top class musicianship. What has been a revelation has been Laura’s other recent book The Last Landlady- An English Memoir. The landlady in question is her grandmother Vi, possibly the first woman to be given a publican’s licence in her own name. Vi is glamorous, inspiring, and utterly confident in her own character and charisma. Laura charts her own coming of age within her Grandmother’s smoke filled, adoring, feisty enchantment alongside her own very lightly worn scholarship on the social history of the post war pub. The book is compelling, poignant and extremely funny. In essence it is perfect lockdown reading. Expect Laura to be invited back to BIF very, very soon.

Another loss to our Crescent Salon series is Gill Hornby and her novel Miss Austen. In 1840, twenty-three years after the death of her famous sister, Cassandra Austen returns to the home of family friends but with an eye to her sisters legacy and a cache of letters that she was rather see destroyed. So transporting is this story of the famous sisters that it encourages the re-reading of all of Austen’s work, which is the highest praise I can give. It is convincing and atmospheric and makes you want to visit Lyme and walk along the promenade in an Empire line frock. Adrian would have closed the Crescent Salon with music composed in the year 1840.

I am fairly self-contained at the best of times and don’t actually have a television. I am struggling as I always do with my wish to read new publications where the reviews capture my imagination and which may lead to festival visits in the future; my love of re-reading; a desire to engage with classic works of literature; and my passion for First World War military history, the architecture of social housing and taxidermy. I’d like to say as a trumpet player, I have been using lockdown to practice my musical skills but sadly that would be an outrageous lie and I’m afraid the Congress Theatre Eastbourne and an am-dram production of West Side Story sometime around 1990 was my last audience. Still, one day……….