Our productions are coming to life in rehearsals and we’re seeing how things will look on stage with set deliveries to Buxton Opera House. With time seeming to move in fast forward in the run up to the Festival, BIF CEO Michael Williams shares his reflections on this year’s two main operas and the themes that link them… 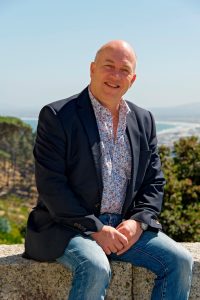 I spent two hot days in London last week attending rehearsals for La donna del lago and Viva la Diva. Rehearsing an opera is a long, complex, seemingly chaotic, haphazard affair. In German a rehearsal is a probe, while in Italian it is a prova.  Both words suggest ‘trying’, which is often the experience for the observer, but a necessity for the director, conductor, and singer to create their art.  When the ‘trying’ became tedious in one rehearsal, I moved to the other in the hope that I might catch a glimmer of what the show would be on opening night. Moving between the opera seria and the opera buffa rehearsals, I was struck how this year’s operas, although different in so many ways, are bound together by the same idea.

Stephen Medcalf was going about the serious business of creating a Donizetti comedy about mounting a forgotten opera seria masterpiece, Romolo ed Ersilia, while down the corridor in a different room, Jacopo Spirei was building a world where Rossini’s opera seria, La donna del lago, could be taken seriously.

Artistic temperament in both rehearsals was running high, and it had nothing to do with the heatwave. Singers need to have healthy egos to deliver a performance that captures all the emotional intensity demanded of their character. In the Rossini rehearsal Jacopo was extracting every passionate moment from his cast to good effect, while in the Donizetti rehearsal the rampant egos of the characters threatened to derail the ‘High Peak Festival’ opera production of Romolo ed Ersilia.  In the one room the company were creating a world where we believe it possible for people to sing about complex feelings of love and loss, while in the other the company were laying bare the truth of what it means to be a professional singer and mounting an opera in today’s environment. 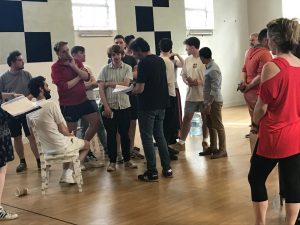 In both rehearsals all the familiar archetypes were in place: the director leaping from his chair to instruct, cajole, demonstrate; the conductor and repetiteur joined at the hip by some weird musical alchemy; the Assistant Director, eager and hovering at the director’s elbow; the bored stage manager checking for the next tea break; the chorus members scrolling their phones waiting for their next entrance; the soloists ‘trying’ everything once, twice, three times and once again from the top; the prop mistress shaking her head at the growing list of props. All in the service of transporting us to a world of believable make-believe, whether comic or tragic.

The joy of Donizetti’s Le convenienze ed enconvenienze teatrali (the clumsy title is translated to the rather ironic Conventions and Inconveniences of the Stage) is not only that he understood the peculiar process of mounting an opera and being a performer, but that his ensemble writing is just as fine as anything he wrote for Don Pasquale and La fille du regiment. Just as the rehearsal room is about to descend into unsalvageable chaos, the Maestro produces a toe-tapping ensemble that brings order, beauty, and riotous joy to the moment.

For your thorough enjoyment of this year’s opera offering, you need to buy tickets to both Italian operas, so that you can experience two sides of the same coin.

A snippet from La donna del lago from rehearsals!