Sebastian Payne, Whitehall Editor for the Financial Times, makes a political road-trip through ten constituencies that made up Labour’s ‘red wall’. Originally from the North East himself, he sets out to uncover the real story of what turned these traditionally Labour seats to the Conservatives for the first time in living memory at the 2019 election. On the way, he explores significant and nuanced social and economic forces decades in the making, including generational shift, the changing nature of work, de-industrialisation and struggling public services. 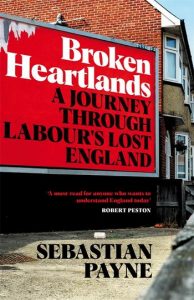 Entrepreneur and public speaker Julia Hobsbawm takes a strategic view on issues such as endemic stagnant productivity, the crisis of stress, and repurposing offices for more creative interaction.

Lord Patten offers an account of what has happened in Hong Kong since the handover and reflections on how to deal with China – then and now.

The Hidden Case of Ewan Forbes: The Transgender Trial that Threatened to Upend the British Establishment

The history of how trans people lost their human rights in the 1960s, told through the life of Sir Ewan Forbes, whose legal case was considered so threatening all records of it were concealed for decades.