The Searchers: The Quest for the Lost of the First World War

By the end of the First World War, the whereabouts of more than half a million British soldiers were unknown. Robert Sackville-West brings together the extraordinary, moving accounts of those who dedicated their lives to the search for the missing: Rudyard Kipling’s quest for his son’s grave; E M Forster’s conversations with traumatised soldiers in hospital in Alexandria; desperate attempts to communicate with the spirits of the dead; the campaign to establish the Tomb of the Unknown Warrior; and the exhumation and reburial in military cemeteries of hundreds of thousands of bodies. It was a search that would span a century. 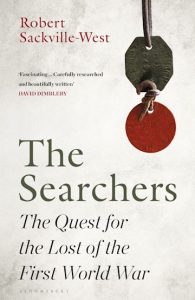 Join our costumed guide for the story of an Edwardian woman trapped by expectations, in the place where she worked as a Voluntary Aid Detachment nurse in the summer of 1915.

Sybil and Cecil: Cutting Through Time

In 1922 Cyril Power, a 50-year-old architect, left his family to work with the 24-year-old Sybil Andrews. Both became famous for their dynamic, modernist linocuts, streamlined, full of movement and brilliant colour, summing up the hectic interwar years.

Christopher Maltman is one of the leading baritones of his generation. His recital with the outstanding pianist Audrey Saint-Gil is a compassionate memoir to all those affected by war.

The Facemaker: A Visionary Surgeon’s Battle to Mend the Disfigured Soldiers of World War One

Shedding light on the ambitious work of the pioneering plastic surgeon Harold Gillies with the First World War soldiers who sustained facial injuries in battle, and how imagination and medical innovation helped to restore faces – and identities – wrecked by war.