Katherine MacInnes retells the story of the race for the South Pole from the perspective of the women whose lives would be forever changed by it.

For the first time, and with unprecedented access to family archives, she recounts the lives of five extraordinary women: Kathleen Scott, who campaigned relentlessly for Scott’s reputation; Oriana Wilson who understood more than most what the men faced in Antarctica and ‘Empire’ Emily Bowers, who had already survived the burning of Perak in the third Anglo-Burmese war. Snow Widows also explores the lives of the indomitable Caroline Oates, who openly snubbed the king’s invitations to celebrate the expedition; and Lois Evans, who was forced to endure the media’s assertions that her husband, the sole ‘Jack Tar’ in a band of officers, must have been responsible for the party’s downfall. 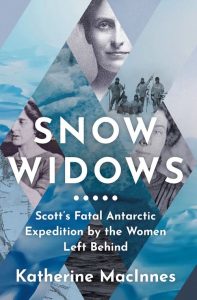 Bestselling author Gill Hornby discusses her new novel, which was inspired by the true story of Anne Sharp, a governess who became very close with Jane Austen.

On the Trail of Wolves: A British Adventure in the Wild West

TV presenter Philippa Forrester, formerly of CBBC and Tomorrow’s World, takes you through her experiences of living amongst grizzlies and wolves in the wilds of the American West.

Lady Hale discusses her journey from self-professed ‘girly swot’ to President of the Supreme Court, along with her landmark rulings on Brexit, domestic violence, mental health and equality.